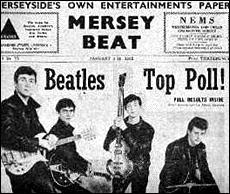 The musical influence in Liverpool in the late 1950’s was British artist Lonnie Donnigan who started the skiffle boom, it didn’t last very long so the newly formed skiffle groups turned to rock ‘n’ roll, the most well known being The Beatles who where just one on 100’s of groups performing at dance halls, church halls and ‘jive hives’ in and around Merseyside, the most famous being ‘The Cavern Club’, which started out as a jazz club but, after some resistance, changed over to rock and roll. Not all groups changed to playing this type of music, some groups played country and western others went into folk music therefore various music styles made up the ‘Mersey Sound’,